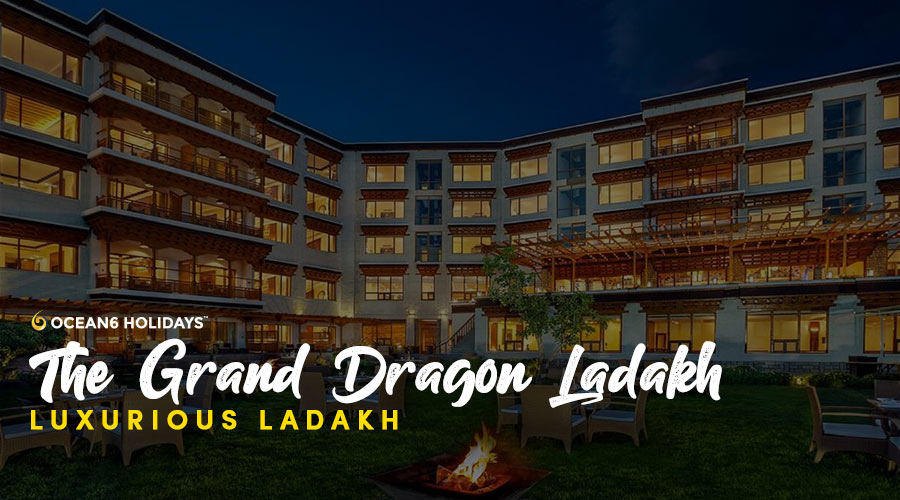 Luxurious hotel, the Grand Dragon Ladakh nestled at an impeccable height of 11,562 ft. in a cozy mountain abode of jagged mountains, quaint monasteries, serene lakes and golden mountains.
With Ladakhi artifices and the view of lofty mountains, staying in this 5 star hotel in Leh Ladakh will be a refreshing retreat to mark its magnificent culture, history, architecture and landscapes in your life.
Experience the immense passion in the luxury hotel not only for seeing the Gray Ghost or the Snow Leopard but also for the luxury of the central heating.
Almost everyone longs for the best hotel in Ladakh to experience the best, mountains in India have to offer. A bonfire underneath a starry sky, high altitude Buddhism lessons, meals amidst the mountains, which are far cries in clamoring city life.

Outstandingly hit and arid mountains with moon-like soil and crystal clear blue water lakes embrace the Buddhist ex-kingdom.
Only a stay over in the lavish hotels can second the picture-perfect Gompas that dramatically crown rocky boulder amidst the whitewashed Stupas topped with faded countless mantra-inscribed pebbles.
Colourful prayer flags fluttering in the mountain breeze spreading the spiritual message metaphorically.
Then, in 1974 Ladakh threw open its gates or the global wayfarers to experience the riches of this place, including the age-old lifestyle and heritage isolated in the snowy heights of the Himalayas.
Here the landscapes change their hues with high mountains and night skies. Back then, this hotel at Leh Ladakh was a startup and a guest house with 2-rooms. A humble beginning of the heritage saga.

The hotel’s traditional background of décor displays the Ladakhi wooden work, which echoes the placid ambiance of the prayer hall monastery of a hamlet.
In this region, this was the first luxury hotel to establish and gave a good reason to both the overseas and domestic travellers to include Ladakh in their travel bucket list to explore its riches and stay in the best hotel in Leh.

Evolution of the Grand Dragon Ladakh

The hotel in its grand avatar threw open in 2007 by the bothers Ghulam Mohiuddin and Ghulam Mustafa, a former painter and conservationist, whose works of art bedeck the lobby and corridor.
And, Indraprastha breathes the air of life to transform the innovation of the brothers into a 5 star hotel in Leh. A Delhi-based firm worked closely for over years to actualize the vision.
The architecture worked closely with the owner. The makers did not only focus on a mere luxury hotel.
They developed a strong essence of social connection by showcasing works of the local artists throughout this hotel at Ladakh and the credit goes to the owner, who supported the unique aesthetic.
This supports the intent of communicating with the local community through its tally of 76 rooms.

In time the hotel has expanded and adapted to the present the ambient of plush décor to cozy up in the chilly ordeal of the lunar landscape of Ladakh.
It reflects the best hotel in Leh with the Ladakhi heritage and grandeur with its pine-wood carved balconies with fretted partitions, teak wood floors, walls glowing with antique turquoise neck-pieces and headgear called Perak, worn by Ladakhi women on ceremonial occasions, luxurious linens including Ladakhi silk called Koshen, embossed with traditional Tibetan motifs.
It gives the milieu of luxurious room with Kashmiri walnut-wood chairs, sideboard painted panels, exquisitely copper and silver crafted tea kettles and of course the Ladakhi style butter tea that both smoothens and warms the body.
Staying in Grand Dragon is bliss for most city dwellers, who are adjusting their lives in cramped towers.
Here the family suite is built across 750 square feet and the luxury suite lavishly sprawls across a gorgeous 900 square foot area.
Every luxury hotel room further bedecked with jewel-toned brocades. One will find the copiousness of arty and elegant teak wood ceilings and cornices.
The selection of toiletries, including apricot scrubs, lip balms, moisturizers, shampoos and conditioners make it at par with the luxurious hotel room of any star hotel.

Savour in The Grand Dragon & explore the landscape

With all its contemporary symbols, the luxury hotel seconds on everything a whip of locale. Like any suites hotels in Ladakh, the outside world, the local flavour is visible in a natural setting, costume, architecture like Tibetan-Buddhist Ladakhi-style.
Here, one can get Zasgyath coffee shop to tickle up the multi-sensory taste in Ladakh and can break the fast as well.
The hotel remains open round the year, especially due to the rise in winter tourism among the young and restless rovers for the mythical like a trek across the frozen ‘Chronicles of Narnia’, in search of Snow Leopard.
This luxury hotel in Ladakh is fitted with solar panels to avert the water crisis of sub-zero temperatures in winter when the supply of freshwater drops. It has been a boon in running a luxury hotel in such harsh terrain.
This also contributes to the national and global endeavours of energy conservation.

At Grand Dragon Ladakh Eat to a Good Health

During the stay in the hotel, one will find that the year-round open restaurant is one of the main attractions.
And to understand it, one needs to have a handful of a sumptuous meal. One can enjoy a rare menu in this hotel at Leh Ladakh.
You can jump on and swig Timstuk (meat and noodle broth), gorge on momos and other Ladakhi at the cafeteria that are displayed with immense snow-cuddled Stok Kangri range.
In this hotel at Leh, the oriental cuisine restaurant Tusrabs overlooks gardens that suggest oases of willow, popular for dotting the high altitude desert.
However, this hotel can give the feelings of well-known luxury hotel in the world, as one can have a full-blown view while dining on the terrace and seems to snatch the rigid mountains within arms’ reach.
Nevertheless, you would miss a lot on the first go for the cosy pampers of the hotel staff and layers of routines for those who are suffering from symptoms of high altitude sickness with the hotel’s famed garlic soup.
After all, this hotel at Leh is located at a dizzy height 11,562 ft. However. Every occupant of the hotel is attended by an experienced doctor, who is on call to monitor the oxygen level and tackle other important situations.

It is a mandate for the receptionist to clamp the device to guests’ index fingers to monitor the oxygen level. Come visit Ladakh once. The high altitude desert and Grand Dragon Leh will evolve your life’s tale, a tale worthy.