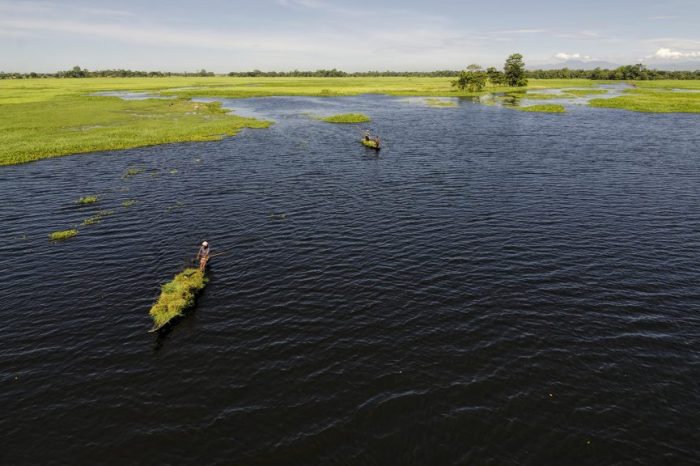 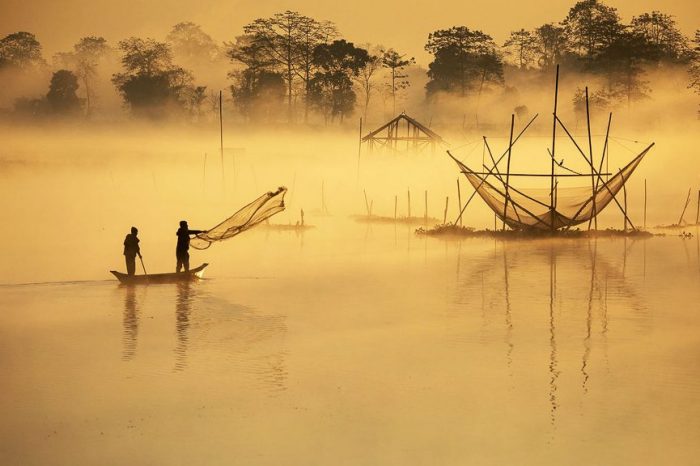 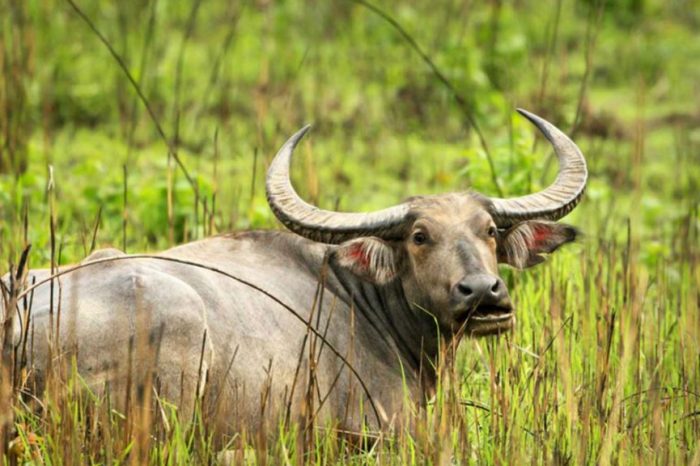 The moment you enter the Kaziranga National Park which is in Assam, you feel a buzz in the crisp, cold, fresh air of the greenery. This is a very talked-about place and every tourist irrespective of where they have come, will feel the palpable buzz and the intrepid traveller in you will automatically rejoice every nook and corner of this national park. Kaziranga National Park sprawls over the alluvial plains of the Brahmaputra River. The park is a World Heritage Site and houses two-thirds of the world’s one-horned rhinoceroses. It has a massive population of 2,413 one-horned rhinoceroses. Other mammals such as bears, panthers, elephants, and tigers are also found here. It has a huge assemblage of beautiful birds too. Kaziranga National Park is one of the rearmost regions in Eastern India which is not disturbed by humans. This national park has achieved noteworthy triumph in wildlife conservation.

This wildlife reserve is in the Morigaon district of Assam. Pobitora Wildlife Sanctuary is approximately 30 km from Guwahati. The sanctuary spreads over an area of 38.8 square kilometres. Apart from the famous one-horned rhinoceroses, there are also wild boars, leopards, wild buffaloes, and Barking deer. There are no less than 2000 birds mainly migratory birds in this reserve. The endangered species of birds include Swamp Francolin, Spot-billed Pelican, and Greater Adjutant, etc. The swamplands of the region entice a lot of waterfowls during the winter months. Many reptiles also dwell in this area. The breathtaking terrain of Pobitora gives an awe-inspiring experience to all. The staff and the people nearby are tirelessly working on a conservation model. Jeep safaris and elephant rides are conducted by the Forest Department. All in all, tourism here is doing great. The timings of the Jeep Safari are from morning 7 am to afternoon at 3 pm.

Manas National Park is also known as the Manas Wildlife Sanctuary. It rests blissfully at the base of Bhutan-Himalayas in beautiful Assam. The distinctive diverseness and scenery of the reserve is a treat to the eyes. Manas National Park extends from Sankosh River which is in the west to Dhansiri River which lies in the east. It covers an area of 2837 Square Km. The core jungle comprises of 500 square kilometres. It is the home of rare species of a pygmy hog, Assam roofed turtle, golden langur, and hispid hare. Manas National Park is named after the Manas River which is a prime tributary of Brahmaputra River and it flows through the centre of the national park. This is perhaps the only natural habitat in the world where immaculate Bhabar pastures amalgamate with the clean Terrai pastures. This place has a very rich Tiger population. It was proclaimed a sanctuary on 1st October in the year 1928.

Majuli or Majoli is a scenic river island in Assam. Majuli is enlisted in the Guinness Book of World Records as the world’s biggest river island. This island can be reached from Jorhat by ferries. The distance from Jorhat is around 20 km. This freshwater island is free from any contamination. Many indigenous people live here. This interesting and amazing place is the cultural capital of Assam. “Raas” is a famous festival which is celebrated here with lots of fan-fare. Majuli also has a deep history. The buildings of Majuli are reminiscent of ancient times. The Dakhinpat Satra is a fine example of Assamese structural design. Ahom is a popular architectural style in Assam and an example of it can be found in the Tengapania monument. Gorgeous Majuli is best visited during the cool winter months. The winters arrive in October and last till February. It can also be visited during the Monsoons. The recurrent showers make this place very beautiful and lively. It is recommended to avoid Majuli during summers due to very high temperatures.

As the name suggests, this cruise takes place in the enormous Brahmaputra River. Brahmaputra River Cruise is just 2 km from the Railway Station at Guwahati. The mighty Brahmaputra River is about 1800 miles long. It extends from the source which is the Tibetan Himalayas and runs until the delta plain in the Bay of Bengal. This navigable river helps cruises. A cruise along the pristine waters of Brahmaputra River is highly appealing to the tourists as well as the locals. Varieties of cruises are available such as the Candlelight Cruise, Lunch Cruise, Dinner Cruise, Sunset Cruise to name a few. The cool breeze caressing your cheeks, sumptuous foods, great live music, etc. give you an awesome experience. The favourite cruise is the most happening Evening Cruise which is very popular among all. In this cruise, you can also observe the beautiful sunset. Normally the cruises last sometime between 1 to 2 hours.

This Hindu temple from the bygone eras sits at the top of Nilachal Hill and lies at a distance of about 9 km from Guwahati Railway Station. It is also called the Kamrup-Kamakhya temple and ranks as one of the holiest places in India. It can be said as the major tourist location in Guwahati. This temple is the most ancient among the 51 Shakti Peethas in the world. Goddess Kamakhya is worshipped here. Goddess Kamakhya is also called as the ‘Bleeding Goddess’. In Hindu mythology, it is believed that the ‘Yoni’ of Goddess Sati fell here. Kamakhya Temple was originally constructed in the 8th-9th century during the rule of the Mleccha. The design that is now present resembles a beehive-like Shikhar. There are wonderful sculptures of Hindu Gods and goddesses and also of Lord Ganesha. Amoti or Ambubachi Mela is the most significant and grand festival which is held every year in June. The timings are from 8 AM to 1 PM and again from 2.30 PM to 5.30 PM.

Dima Hasao is a very renowned place to visit in Central Assam. It was earlier called as North Cachar Hill District. The land is covered in culture and seeps scenic beauty. It is tucked away among the breathtaking hills and so it’s also known as the “Switzerland of the East”. There are many places of interests in Dima Hasao and so you should not miss out on this wonderful place in your holidays. There are waterfalls, rivers, hills and lots of cultural places. Haflong is a must-visit place in Dima Hasao. Temples, historic bungalows, lakes, churches from the British era are few things that fill up Haflong. Another very unique place to visit is Jatinga. (Here birds can be seen committing suicide.) Once upon a time, Dima Hasao was the capital of Kachori Kingdom. Maibong is a place on the edge of River Mahur which has ruins and sculptures from the bygone Kachori Kingdom.

The holy town of Sivasagar is situated in the upper portion of Assam. It sits between many beautiful and opulent historical landmarks. The Ahom monuments are a work of art and so are the other luxuriant palaces. Graceful forests and a very serene environ surrounds this place. Sivasagar means “Ocean of Shiva”. The Sivasagar Sivadol Temple is a major attraction in Sivasagar. The temple was constructed by Kuwori Ambika who was the wife of Swargadeo Siba Singha in 1734. Another interesting place to visit is Devidol which celebrates Durga Puja in April and May and again in September and October. You can also visit Devidol which is dedicated to Devi Durga and hosts Durga Puja during the months of April-May and September-October. Some other architectural marvels include Vishnudol, Ghanashyam Dol, Talatal Ghar, and Rangpur Palace. The best time to explore Sivasagar is during winter months i.e. October and November.

It is a little Industrial town in the Dima Hasao district. This town is located on the fringes of Assam. This famous location is a sheer favourite among tourists. There are many large industries in Umrangso. It has Nepco’s Kopili Hydro Electric Project. There are also quite a few cement factories such as Vinay Cements, NECEM, etc. Beautiful hills and luxuriant greens cover this place. This place is ideal to spend some days in the lap of nature. One of the main things here is the Hydro Electricity project and also the Kopili project. Umrangso also has hot water springs which are visited by many tourists. You can reach Umrangso from Barapani Airport which is approximately 225 km away from the town. You can also avail Private Cars from Haflong. The ideal time to visit this place is from winter to spring. The weather becomes cool and pleasant October onwards and it is perfect for travelling.

This scenic waterfall lies almost 230 km from Guwahati and 120 km from Haflong. It is situated in the North Cachar Hill District. Panimur is the sole hilly region of the district. It’s a very peaceful area. People who love to dive and swim can jump off from rock cliffs in the river below and enjoy themselves. The pristine blue waters are absolutely stunning. There is also a place for worship known as Haraulim Shibraikho. Panimur Waterfall is formed by the big boulders on the Kopili River and the force with which the water rushes; it makes it look like a milky white cascade. From nature lovers to photographers, everybody loves this place. This place gets a lot of visitors during the spring and winter. The nearest rail-head is in Lamding from which you need to book cabs or private vehicles. Panimur Waterfall has also found mention in a song by famous singer Bhupen Hazarika.

If you were already planning a trip to Assam or developed an interest about this beautiful place after reading this article on Assam, then, you can definitely check out: Offbeat Assam ; Bramhaputra Tour ; Assam Wildlife Tour ;
We have hand crafted these itinerary only for you. You can even contact us for more customized tour plans to Assam.