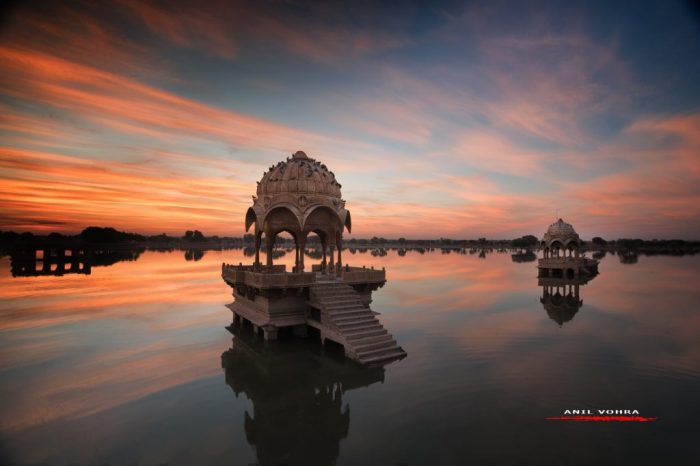 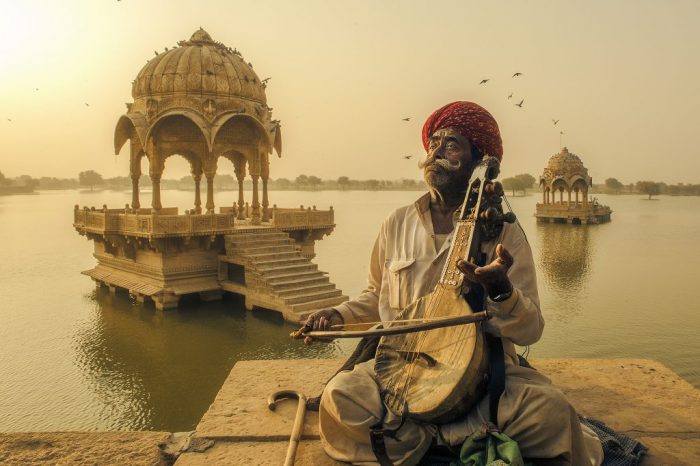 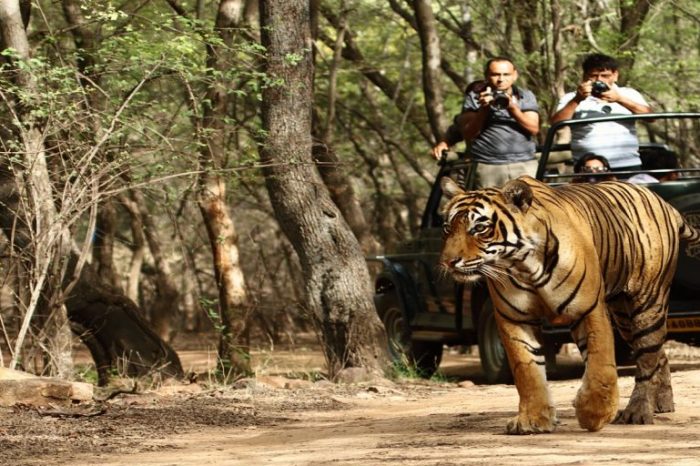 If you want to relive India’s royal and princely past, then Rajasthan is the place to go. The remote deserts, the vibrant cities, the awesome ‘Havelis’ in every nook and corner, the rustic village life, the melodious folk songs, and the rhythmic dances and the tigers make Rajasthan a quintessential regal hotspot. The land of Kings is a perfect blend of tradition with contemporary lifestyles. When travelling in Rajasthan, you will automatically get connected with its spirited culture. The sheer size of Rajasthan can leave you confused to some bit because there are numerous cities and sights to see. So the first important step is to plan your trip very mindfully. We hope to give you some substantial insights into a few of the major places and sightseeing options that this grand state has to offer.

The largest city in Rajasthan is also its capital city. The colours of the buildings in Jaipur are predominantly pink and that’s why Jaipur is termed as the ‘pink city.’ Have it ever occurred to you why is the city painted in pink mostly? Well, it was painted pink to greet the then Prince of Wales, H.R.H. Albert Edward in 1876 during the reign of Sawai Ram Singh I. So a lot of the buildings and avenues, etc. retained the pink colour and it got the nickname as the Pink City. Jai Singh II, the Rajput ruler established Jaipur in the year 1727.
Hence it’s named after the ruler of Amer. The pink city is a walled city except for the Southern sides where it’s encircled by hillocks. The city has some amazing plastered buildings, exalted forts, and splendid palaces. Jaipur happens to be one of the foremost planned cities of India. A Bengali architect from the village of Naihati named Vidyadhar Bhattacharya designed this city. The pink city has also received the status of World Heritage Site by UNESCO on 6th July 2019.

Indulge in the royal aroma of marvellous forts at Jodhpur. The human race could not build a time machine yet; however, it would be a total sin to deny the innate magical potential of certain places of transporting you to an era long gone by. Jodhpur will instantly catapult you into the lost world of the Rajputana dynasty impregnated with history at every turn. Once upon a time, it was the first city of the Kingdom of Marwar. The second biggest city of Rajasthan is a very renowned tourist attraction. Jodhpur overlooks the Thar Desert and is also known as the Sun City or the Blue city. Needless to say, there are majestic forts in Jodhpur along with houses painted in blue, several temples, amazing architectural monuments, multiple streets for shopping, and lakes. The fabulous Mehrangarh fort is in Jodhpur. It is also famous for its snacks and sweets. This enchanting city gets to be the grand host of innumerable travellers.

The beautiful city of Udaipur is the erstwhile capital of the Mewar Kingdom. Udaipur is the city of lakes. Four lakes encompass this city. It is set amid the Aravalli Ranges of Rajasthan. This is a highly sought after tourist destination. The city was established by Maharana Udai Singh II in 1558 who belonged to the Sisodia clan of Rajput. Udaipur is the crown jewel of Rajasthan. The natural beauty of this place is in the bounty. It has got awe-inspiring architecture and beautiful placid lakes and complimenting them are the marvelous palaces and forts. Lake Pichola deserves a special mention here. The city, in fact, has more than ten lakes which are somehow joined with each other. Udaipur is a beautiful mosaic with magical marbles. The ornately decorated buildings and the numerous tapered streets are purely unmatched and timeless. You will be drenched in a riot of colours in Udaipur as the streets, the foods, the jewelry, the residences all are so vibrantly coloured.

Time for some adventure! Goa is the party capital of India. This beach is famous for adventure seekers, nature aficionado and fun lovers. Mostly popular among the Hippie culture, this beach is the most favourite for foreigners. This happening sea-side was discovered in the ’60s by the hippies and quickly became popular for trance parties and backpackers. Later on, it gained popularity among the Indians also. This sea-side has many flea markets and inexpensive guest houses. Anjuna Beach stretches for nearly 2 km and is lined with beach bars, cafes, family run-guesthouses, and coffee shops. This place is ideal for water enthusiasts. Water activities that take place here are paragliding, jet skiing, etc. There are many small rocks scattered over the sea-side where you can sit and sip your drink and enjoy the Sunrise. Casa Anjuna, Banyan Soul, Whole Bean Tofu, Cafe Diogo, etc. are some places to let your hair down. The trance parties are held from October to April.

The Great Indian Desert or commonly called the ‘Thar desert’

It is the 17th largest desert in the world. It is a big arid region. 85% of the desert lies in India. A camel ride in the desert or camping under the milky sky is the ultimate way to spend your time there. The Rajasthan Tourism Development Corporation organises The Jaisalmer Desert Festival in the month of February. These festivals call for the locals to dress up in their traditional wears which are vibrant and colourful. There are many desert camps in Jaisalmer. Some of them are the golden camp, limra desert camp, dangri desert camp, and desert spring camp. When you visit Jaisalmer, do not forget to plan a one-night stay in a camp to make your vacation even more attractive. These camps have all the modern amenities to make your stay cosy. There are folk performances that include songs and dances and features fire dancers, and gair dancers.

Mount Abu is a scenic hill station in Rajasthan. The tallest peak is Guru Shikhar which has a stellar height of 1722 meters over sea-level. Mount Abu is one of the loveliest places in Rajasthan sprinkled with waterfalls, lakes, forests, and rivers. Arbudaanchal is the earliest name of Mount Abu. Mount Abu takes pride in being the one and only hill station in Rajasthan. The verdant greens all around and the cool and comfortable weather makes this place a major attraction among travellers. This engrossing place retains its ancient historical charm. Dilwara temples are without a doubt one of the most fascinating temples in Mount Abu. Mount Abu is a fetching gem in the stone-studded Aravalli Hills. The serpentine way to this small hill station is a surefire way to revive you and connect with nature. This mesmerising hill station is a welcome change from your mundane life. The peaks in the background are best enjoyed during the summers but that doesn’t mean that winters will disappoint you.

Bikaner was established in the year 1488 by Rao Bika. The city is 330 km from Jaipur and stands amidst the Thar Desert. Bikaner was an arid wilderness till the mid of 15th century and was called Jangladesh. This cultural paradise is covered in beautiful architecture, vibrant colours, and lots of festivals. The fourth biggest city in Rajasthan commemorates its foundation on Akshaya Tritiya. On this auspicious day, they eat special Rajasthani foods and fly kites. Both camels and camel festivals are an integral part of this city. The city has the power to enthral you with camels walking along the scenic sand dunes against the setting sun, its marvellous palaces from which you cannot take your eyes away and the intricately designed forts, a look at it can take you back to its bygone era. The history loaded city exudes the past charm of the Rajput epoch. Bikaner is rightly called the camel country.

Chittorgarh is also known as Chittaurgarh or Chittor. This mystical land is dipped in timeless folklore of bravery and sacrifices and remnants of the ancient forts and citadels. Chittor was once the capital of Mewar. It is believed that a Maurya King named Chitranga constructed the Chittaurgarh Fort. In fact, the Chittor Fort was initially known as Chitrakuta. This place stands on the southeastern side of Rajasthan. It is the land of the Chittorgarh Fort which happens to be the biggest fort in all of India and also in Asia. The majestic Chittorgarh Fort sits atop a hill and covers an area of approximately 700 acres. This famous fort holds a very significant place in history for the self-immolation of Rani Padmini and the siege of Alauddin Khilji. The place has witnessed three major sieges. Chittorgarh is the city of honour and pride. Many beautiful festivals are held are every year.

Ranthambore is placed in the Sawai Madhopur district of Rajasthan. Ranthambore is famous for its Ranthambore National Park. This National Park is one of the most popular and largest National Parks in North India. It is around 130 km from Jaipur. Once upon a time, it was a renowned hunting ground for the rulers of Jaipur. At present, this national park serves as the hotspot for tiger aficionados, nature lovers and ardent photographers

Located at a distance of 240 km from Jaipur, this city was a portion of the former Rajput Kingdom of Bundi. Kota is positioned on the southeast side of Rajasthan. Kota is situated on the banks of river Chambal. The place is densely populated and ranks third as the most populous city in Rajasthan. Kota is considered as one of the best places to get tuitions for IIT. Hence it has earned the name as the Coaching Capital of India or the Education City of India. This city is also famous for Kota Doria or woven muslins. Kota also has beautiful gardens and palaces.

Kumbhalgarh is made of stunning landscapes and spectacular forts. Kumbhalgarh or Kumbhal fort lies on the western span of the Aravalli Hills. It is your portal to the royal glorious past. You can discover numerous historical gems in here. Start your journey with the Kumbhalgarh fort which has the second lengthiest wall in the world. Make out some time to visit the Ranakpur temple adorned in remarkable carvings and sculptures. Whatever you do, do not miss out on the Sajjangarh Fort with its unforgettable vista of the lake. There are also jungle safaris and treks to enjoy. From enriching history to vibrant colours, Kumbhalgarh will surely impress you.

Bera in Rajasthan is the Leopard capital of India. As unbelievable as it sounds, Leopards roam freely in here. Bera is encircled with forests and a River Jawai flows through it. There is also a Jawai Dam on it. This place has a scenic lake which is the residence of quite a few large crocs. This off-the-beaten-track place is unknown to many. This place has not got any maddening crowd and thus you can enjoy the wildlife at peace. It is also easy to spot the feral beings. Leopards are actually hard to spot but in Bera, they are all over.